Firstly, a very Happy New Year to all! Looks like it’s going to be quite an exciting one for GGP/Glenbervie Duo, but more on that later…

Autumn and early winter was quite a busy time for us. We got together with some friends in October to play at the local SNP branch’s 50th anniversary, held in the Dobbie Hall, Larbert. Of course, it was a Scottish themed night and so our music seemed to go down rather well. It’s always fun to get others into the mix, too! Then Neil and I went on holiday for two weeks, to Holland, Belgium and France. Neil was privileged to be given the chance to play at the Menin Gate in Ypres, and did a moving rendition of ‘Bloody Fields of Flanders’. We visited the graves of relatives who had died at the Somme and in action in WW1, with Neil playing pipes at the gravesides. During our last few days, whilst staying at a lovely campsite in Holland, we were invited to do a few tunes at the pub on the site. Bit of a ‘busman’s holiday’, really!

November saw us doing our usual stint at Torwood Garden Centre, with Neil piping in Santa and the Cairngorm Reindeer, followed by a couple of hours of festive tunes from Glenbervie. We also enjoyed performing at Stenhouse and Carron Ladies Group on the 20th, when they held a Scottish themed evening. In December, Neil received an invitation from one of his Skype pupils, Steve Heys, to join him in London to play before the performance of Tony Robinson’s ‘The Three Ships’ nativity. They then went into St Marylebone Church to watch the event, which proved to be excellent. Not to mention getting to meet some famous faces afterwards! 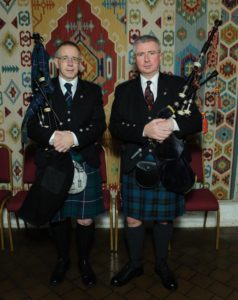 So, to 2018…we are excited to say that we’ve been given the chance to go to the Falkland Islands for two weeks, thanks to funding from the Shackleton Scholarship (Quality of Life). We will be taking piping and clarinet/guitar workshops with youngsters and adults from the local community around Stanley, as well as playing at ceilidhs and giving performances in different locations in the islands. We may even get to meet some penguins! More on that, along with photos, once we’re back home. Before we head south, however, we have a few a Burns Nights to do…seems to come round fast!