We had a fantastic trip to San Diego in April, having been invited by the House of Scotland to perform at their Tartan Day in Balboa Park. We also did a gig at the Fourpenny Inn (Scottish pub) and a concert in the House of Nations, where Neil had the honour of playing for the World Champion Highland Dancer (under 16s), Beret Dernbach. Our host, Ross, had arranged for us to play at his daughter’s school one morning and the wee ones seemed to enjoy our music. Neil also took piping workshops and we had some time to see around the area, which is quite stunning.

The day after we got home, we supported Parkinson’s Scotland at the Kelpies, where they were doing a couple of sponsored walks. Neil played pipes the whole way round the 1 mile route – which turned out to have been nearer a mile and a half! The other participants seemed to appreciate the skirl of the pipes.

In May, we did a couple of performances of Jacobite songs and tunes for school groups at Callendar House, Falkirk. It seems likely that we’ll be doing the same next year, so look out for that!

Neil was asked to play for a visiting Icelandic football team who were playing against Falkirk over 35s. Their goal-scoring celebration tune was a Demis Roussos song which Neil had to learn to play on pipes – just one of the many random things which goes with the job!

We enjoyed a few days in Norfolk – our third time playing at a lovely country pub near the coast. Sadly, it was our last time with those hosts as they have now moved on. But we had a great weekend playing for locals and visitors and being thoroughly spoiled by Daniella and Stephen.

In June, we participated in the Paisley Society Clan Gathering at Ardtalla, Slammanan. Despite inclement weather, Westerlea and Lady Jane ensured the day of the BBQ ran smoothly and we enjoyed entertaining the guests with our music. On the Sunday they had arranged for an outing to Loch Katrine with a boat trip on the SS Sir Walter Scot to Stronachlachan. Neil braved a downpour to play pipes at the prow of the boat, but the sun came out for our picnic by Loch Chon, where we played some songs and tunes for the guests.

Our next trip is to the Isle of Man in the middle of July for the Celtic Gathering in Peel, then we have Airth Games on 27 July, a twinning trip to the Odenwald for the Schottische Nacht in August, a performance for the Cyrenians in Dollar Park on 17 Aug and Culross Fete the day after that. In between times, Neil will be doing his usual teaching and Kathryn will be keeping everything else ticking over!

Parkinson’s Scotland at the Kelpies 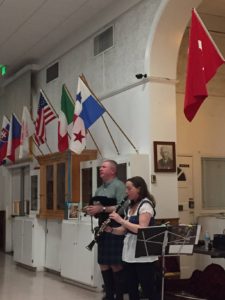 On board the SS Sir Walter Scot