Wow, what a year 2019 turned out to be for us! It was a real mixed bag of musical events that challenged and uplifted us and we met some wonderful people along the way. As Glenbervie Folk Duo, we did 37 gigs in the year. With piping gigs added, we did 20 in the local area, 6 for charity, 7 held in schools and 12 took place outside Scotland.

We played in San Diego, Norfolk, the Isle of Man, Odenwald area of Germany and Ardersier. We travelled by plane, car, boat and train! Four events were festivals – the Falkirk Tryst Festival in May; the Celtic Gathering, Peel in July; the Ardersier Folk Festival in Sep and the first ever Falkirk Arts Festival, also in September.

Unfortunately, Kathryn had severe toothache during August and our usual outing to play at Culross Fete had to be cancelled. That was the day after she bravely endured playing for the Cyrenians at Falkirk’s Dollar Park. It turned out to be an ongoing dental problem so the guitar came into play more than usual!

An exciting day was had in August at Castle Sound recording studios, with sound engineer Stuart, as we began putting down tracks for our new CD. The second recording day will be in January, so look out for the official CD launch, hopefully in early spring! We’re delighted with the sound that Stuart produced, as we wanted it to be more or less as it is in a live performance. Looking forward to hearing the finished product.

Another bit of recording of a different type took part this month. Our friend Kayleigh Boardman is a superb Highland Dancer from Falkirk. She has done a few events with Falkirk Piping/Glenbervie. So we arranged to use a new venue, the stunning Den at Blairhall Farm, to record Neil piping for Kayleigh dancing. Kathryn was camera operator for the day. The idea is to have a list of tunes for pipers to play for Highland dancers, complete with videos. Some of these can be found on our YouTube channel, Falkirk Piping.

2020 will start off quite busy, as we’re moving house in January, recording the CD, and spending a week back in the Odenwald to play at their Burns Night. However, we would like to continue to be involved in a lot of local events next year and to try to spread a bit of cheer with our music. Meanwhile, we’d like to thank everyone who came to hear us, supported and encouraged us, and invited us to play in some fabulous places this year. We’ve had a blast! May you have a happy, healthy and prosperous 2020, and keep supporting live music! 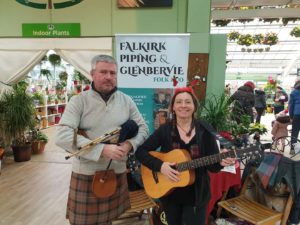