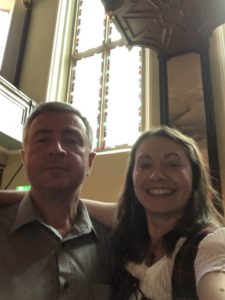 August and September have been busy months for GGP and Glenbervie! We had our first ever Edinburgh Fringe show at St Mark’s in Castle Terrace. A lovely venue with superb acoustics and very helpful front-of-house folk. We were delighted to have so many people come along to hear us, especially as it was a mixture of friends, family and random Fringe visitors!

Neil was asked to play at the World Piping Championships on Aug 12 with the Scots Guards Association (South) so we spent the day on Glasgow Green, catching up with old friends and even meeting distant relatives, all the way from Baffin Island! Always fun to hear so many bands playing.

Another first for us was playing at Culross Fete and Farmers’ Market. The sun shone and the wee village was buzzing with locals and visitors. We really enjoyed being wandering minstrels for the day, especially when Neil got the chance to play for Highland dancer Kayleigh Boardman. They caused quite a stir!

The beginning of September found us heading north in the campervan for a couple of gigs in the Inverness area. The first was at Hootananny in Inverness, sharing the stage with our good friends George and Tony of Corralach. It was a fundraising gig in aid of Macmillan Cancer Support (more on that later!) and what a great night it was, with over £400 being raised. The following night found us at Ardersier Folk Club, where Corralach kindly did the warm up for us. A most enjoyable evening, with lovely people.

Of course there have been the usual weddings for Neil to play at and Kathryn has had Falkirk Tryst Orchestra rehearsals too – concert on Friday 6 October in the town hall, which will consist of Transatlantic classics, and be conducted by the new musical director Michael Graham. The orchestra’s founder and previous conductor, Bob Tait, retired recently.

Neil has had to put a cap on the number of pupils he currently teaches, as he is at full capacity! Not a bad problem to have…all in all, busy times, but it’s all good!