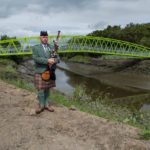 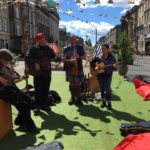 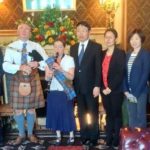 Visit of Chinese Delegation to Falkirk

Where have the first 6 months of this year gone? Hard to believe we’re into July already! It’s been a busy time for us since returning from our Falklands trip. As a spin-off from that, we decided to put out a notice to local schools, offering to come and play our music for them and to share a bit about the instruments and some of the background to the tunes. To date, we have visited 4 primary schools and thoroughly enjoyed it! The children and teachers seem to have had fun, too.

We had 3 adult pupils visit us from the Isle of Man for piping workshops with Neil. This included an outdoor practice at the Dunmore Pineapple, which drew some surprised glances from visitors to the grounds!

We decided in the spring to change the business name from Great Glen Piping to Falkirk Piping. This was partly to save confusion, as we are no longer resident in the Great Glen, and partly because we are trying to localise things a bit more. (Despite the fact that Neil has Skype pupils worldwide!). So far, it seems to be working. Neil was asked to play at the opening of a new bridge at Abbotshaugh, over the River Carron. Later that week, we played for Clean Air Day in Edinburgh, in a pop up garden in George St. Our folky pals Mandy and Harry joined us.  That evening, we did the Floor Spot at Crieff Folk Club. A first for us at that venue, and we seemed to be well received! Then the following week, we were asked to play for a Chinese Delegation who were visiting Falkirk. So June has been quite busy! More happening in July and August so look out for updates…